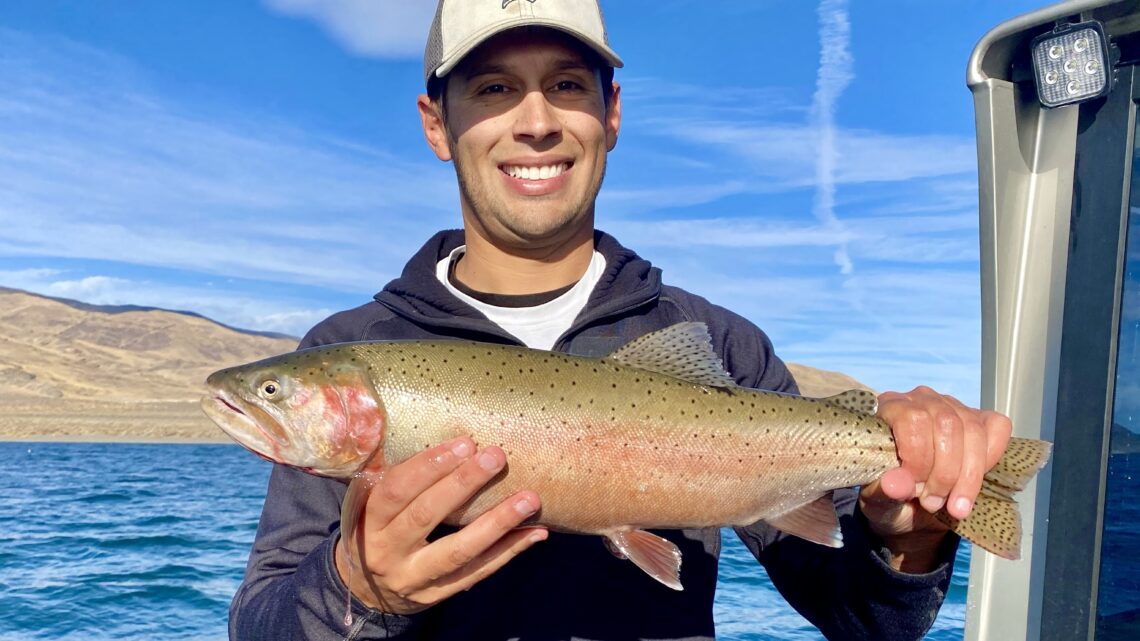 As the sun crept up over Tohakum Peak, I got my first glimpse of a fishery that’s been on my bucket list for a long time—Nevada’s unique and legendary Pyramid Lake. Known by locals as the “desert sea,” Pyramid is located completely within the Paiute Tribe Reservation and remains virtually untouched by modern development. Its turquoise waters are surrounded by rocky, almost Martian terrain.

Pyramid is the remnant of ancient Lake Lahontan, an inland sea that once covered most of Nevada. At 188 square miles, it remains larger than any lake in Idaho. It’s also approximately one-sixth as salty as ocean water! But for all its distinctive qualities, one stands out: Pyramid Lake might be the best trophy trout fishery in the West.

Several circumstances converge to help Pyramid trout grow to massive proportions. They are native Lahontan cutthroats that thrive in Nevada’s alkaline-rich waterways. The lake is also carefully managed to promote trophy opportunities. And, most importantly, it is home to millions of tui chub, native baitfish that provide world-class forage. The result is a lake where a 10-pound trout are not uncommon, and giants over 20 pounds are caught every year.

Now, it was time for my maiden voyage. Buddies Caleb and Randal joined me for a road trip to Pyramid, where we linked up with JD Richey, a fellow columnist and who also guides across the western U.S. After catching a few hours of sleep at Pyramid Lake Lodge, we met JD at the lake’s only boat ramp.

Weather is a huge deal at Pyramid, and our trip brought both good and bad news. On the plus side, we got a sunny October day with moderate wind. Unfortunately, a massive storm had come through a few days prior, scattering the schools of chub (and the trout, with them).

When baitfish are schooled up, Lahontan can be targeted with tube jigs, swimbaits, jigging spoons and streamer patterns. The same holds true during winter, when the trout push the chubs close to shore (and many anglers target them from stepladders, a unique Pyramid tactic). But with the fish dispersed over thousands of acres, our best chance was to cover water by trolling with spoons and crankbaits.

I helped JD rig up four rods on downriggers. One particular spoon caught my attention. It had a unique shape and was painted in a “Wonder Bread” pattern of white with blue, yellow and pink spots.

“I got that from a guy in Alaska,” JD said. “But he won’t tell me where he gets it. He just sends me a couple if I run out.”

After an hour of trolling, one of the rods popped off its downrigger. When I reeled in the slack, the line was still in the downrigger clip, but when we removed the line from the clip by hand, I immediately felt the thump of a fish.

“Wonder Bread for the win!” I smiled.

The fish fought hard on our relatively light gear, but cheers broke out as we netted a 23-inch Lahontan—a beautiful, colored-up male pushing 5 pounds. It was not a Pyramid giant, by any means, but it was a new personal best Lahontan for me, topping the 20-inch Idaho state record I caught through the ice.

Our day unfolded in similar fashion. The bite was tough, and jigging opportunities never materialized. We fished several areas—none cooler than the stretch near the tufa rock “pyramid” formation—experimenting with different lures and depths as we went.

Wonder Bread remained the meal of choice. We scraped together about one bite per hour, and all but one came on JD’s mystery spoon. Our catches were quality specimens ranging from 20 to 24 inches and 3 to 5 pounds, but we never hooked into a giant.

Back at the lodge, JD joined us for dinner and Game 1 of the World Series. The stories, jokes and laughs continued to flow, even as the trophy Lahontans covering the walls provided a mildly painful reminder of what’s possible at Pyramid when conditions are right.

Still, I’m calling our debut a success. We caught nice cutthroats, experienced the sights and sounds of a one-of-a-kind fishery, and got to chop it up with a seasoned pro in JD, along with a fun mix of locals and fellow travelers. My monster Lahontan will have to wait until next time—but there will be a next time, and I can’t wait! Tight lines!