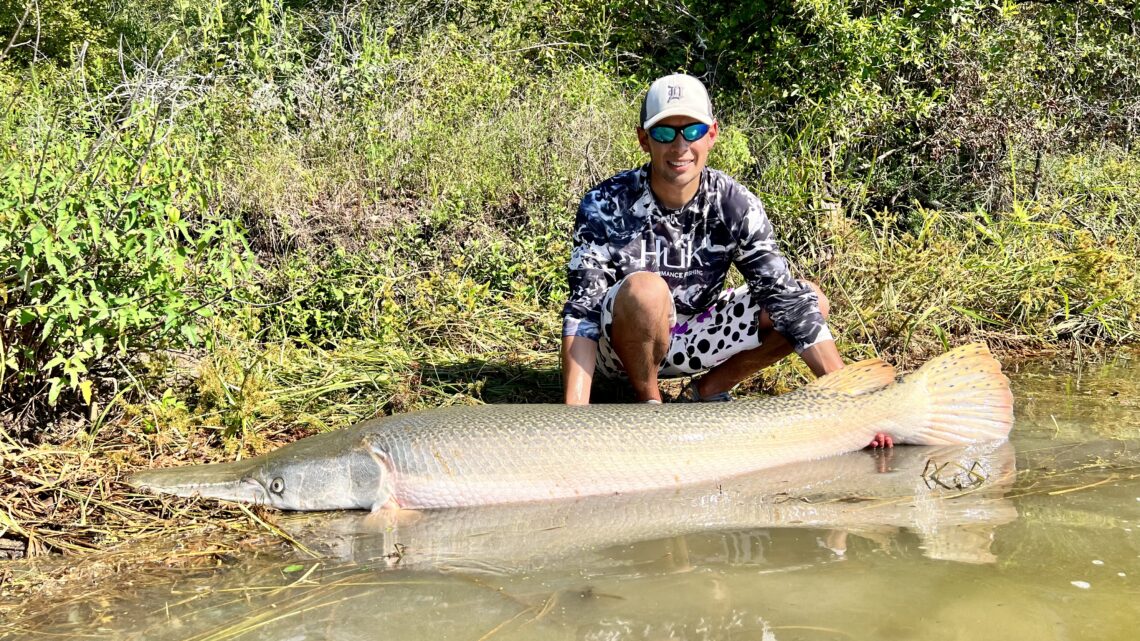 The air was thick and sticky when I first laid eyes on the monster’s lair—one of the countless lakes created by flood runoff as the Trinity River winds its way across eastern Texas. As I stood on the bank, a large fish quietly surfaced, its identity shrouded by the coffee-colored water. I had a hunch I’d just seen my first alligator gar!

Moments later, legendary gar wrangler Bubba Bedre approached on his boat. He welcomed me, my wife Anna and my Uncle Rob (a longtime Texan and first-time fisherman) aboard for our first-ever gar hunt.

I first became fascinated with alligator gar—the second-largest freshwater fish on our continent, behind the white sturgeon—while watching River Monsters with Jeremy Wade. Bubba took Jeremy fishing for that episode, and his Garzilla Guide Service has since become the foremost authority on alligator gar.

“The day that episode aired, my phone blew up,” said Bubba, who now employs nine gar guides across the region. “And it still hasn’t stopped ringing.”

A few miles into our boat ride, we stopped and surveyed the Bayou-like landscape. We saw a large gar on Bubba’s sonar, and several big fish rolled (gar can breathe air, and they often surface to take a gulp). Bubba hacked two carp into one-pound chunks and we casted five baits into the depths.

As the baits (marked by large, orange slip bobbers) marinated, Bubba entertained us with stories of his adventures in Texas and his most memorable clients—all told with hilarious country flair.

After 45 minutes of laughs, things got serious. One of the floats was moving out of formation! I grabbed the rod and fed line off the open reel, remembering Bubba’s advice to let the fish have the bait way longer than you think you need to. Gar snouts are incredibly bony, making it virtually impossible to set the hook until the fish has the bait past those double rows of teeth.

I reeled down and set the hook hard as a heavy fish started peeling line. I’d never wrestled a gar before, but this sure didn’t feel like a small one!

Several minutes into the fight, the fish erased any doubt with a violent, drag-burning run. Bubba joined me on the deck, trying to catch a glimpse of our quarry in the murk. It’s strange fighting a fish for more than 10 minutes without ever seeing it. When it finally surfaced, I could barely believe my eyes.

“Giddy-up, boys and girls!” I shouted. “I think he might be taller than you, Uncle Rob!”

The fish was too big to bring aboard, so Bubba secured it with a lasso (when in Texas, right?) and we motored ashore for pictures, measurements, and a little science. At 6-foot-7 and 130 pounds, this fish was the largest of my angling career. I got in the water for an up-close look—its scales were dragon-like armor, its back and fins sported a unique speckled pattern and its dental weaponry was breathtaking. This was the coolest fish I’ve ever seen!

Before releasing the gar, Bubba inserted an electronic tag near its tail. For decades, gar were unceremoniously hunted because of their fearsome looks and reputation for eating game fish. But in reality, they pose no threat to humans and play an important ecological role as apex predators. Alligator gar can live 50 years or longer, so it takes a long time to rebuild populations. They are now part of a conservation program, and Bubba tags fish to help Texas Parks and Wildlife track their populations. This fish was a rare find—a trophy-sized adult that had never been tagged!

Tired, soaked and covered in gar slime, I climbed back aboard and we went out to finish our afternoon. We caught another alligator gar nearly four feet long, as well as a huge blue catfish (I had to go swimming for that one, too, to untangle my line from a tree stump). The whole experience was awesome, but that big gar will long rank as one of my most memorable catches. It also provided an important reminder—when you travel, it pays to bring (or rent) a fishing rod. Because you never know what unforgettable fish might be swimming in unfamiliar waters. Tight lines!

Steelhead Arrive in the Boise River