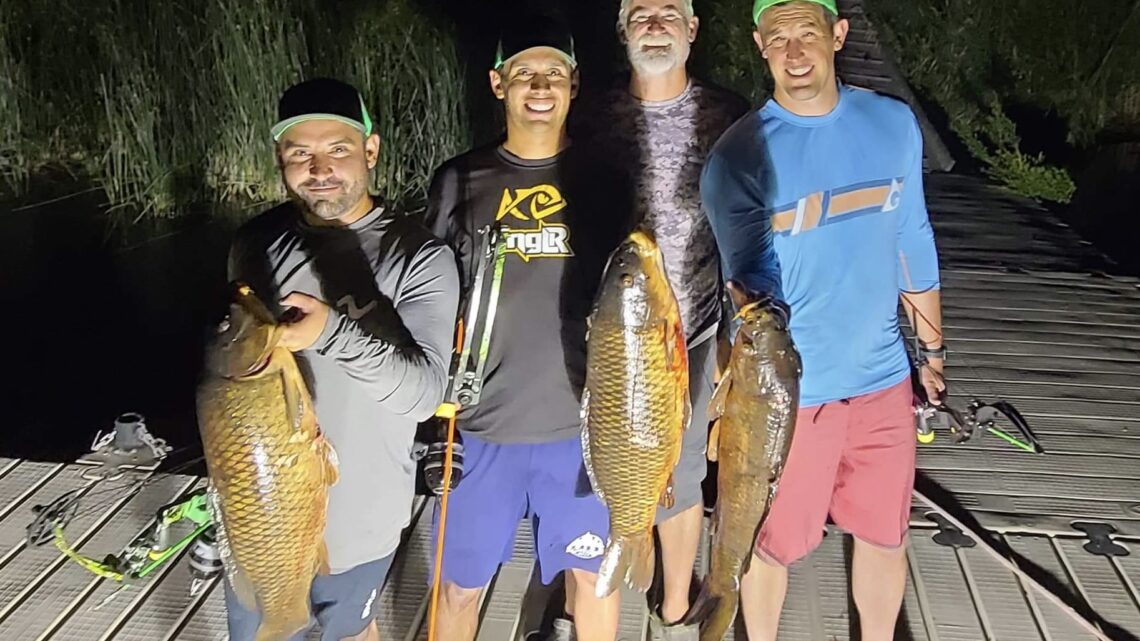 As we motored down the Snake River in the twilight of a 100-degree summer night, I looked at my companions, Caleb and Randal, and smiled.

Maybe it was the delicious burgers Captain Tim Parrish had fed us pregame, or maybe it stemmed from my affinity for medieval TV shows, but I was particularly fired up for this trip—an archery adventure with Captain Tim and bowfishing expert Matt Carlson of Hammett Valley Fishing Adventures. I hadn’t fired a bow since Boy Scouts, but I was ready to try this unique method of fishing for the first time.

Five miles upriver, Matt turned on the boat’s platform lights. He gave us some safety tips and instructions on using our gear. The Vader Bowfishing Carbon Saber bows were outfitted with large push-button-style reels spooled with 200-pound braided line. To shoot, you knock an arrow, push the reel button and wait for a target to present itself.

By the time we’d been debriefed, the lights were warmed up. It was amazing how much they illuminated the river beneath us—we could see to the bottom in up to eight feet of water.

“These are the same lights they use in big parking lots,” Matt explained. “Except those are 150 watts, and these are 400.”

Matt deployed a trolling motor and steered us downriver, keeping the boat over shallow water where we’d have the best opportunity to shoot at non-game carp and suckers.

In five minutes, we spotted a dozen sturgeon up to seven feet long. Tim also guides for sturgeon, but on this night, seeing these underwater dinos was a just an awesome bonus.

As I peered into the gloom, a large, brown shape appeared ahead of us. I drew my bow and took aim, but something didn’t look right. As the shape came into the light, I saw this “carp” was actually an underwater beaver. Too cool!

The beaver sighting was followed by dozens of muskrats. Our target fish, however, were proving difficult to spot. Multiple days of triple-digit heat had pushed the carp under the weeds, making them an elusive quarry.

Our tough start continued when Matt’s trolling motor died. Undaunted, he pulled out a river pole and began pushing us down the river, gondola-style.

Finally, we came over a group of non-game fish. They were mostly suckers, but we didn’t care. Soon, arrows were flying from all sides of the platform.

“Are you boys going to hit anything?” Matt teased. “Shoot lower!”

Shooting low is crucial in bowfishing. Because of the refraction of the water, the fish are further under the surface than they appear. Matt explained this, but it definitely takes some getting used to.

On the next stretch, one of my arrows grazed a fish. One of Caleb’s came back with scales on it. Finally, Caleb connected on a big sucker. Cheers and high-fives ensued as we brought our first fish aboard.

We continued our moonlight float. Caleb shot another sucker and we had plenty of near-misses, each accompanied by ribbing from the rest of the crew. But then I spotted a big carp up shallow, with a rare broadside opportunity. As I drew and took aim, Tim leaned over and muttered “Lower. Trust me.” I nodded, pointed two inches lower and fired. BULLSEYE!

The carp fought like crazy, but I soon had it to the boat, and Tim hauled it aboard. Our celebratory whoops echoed through the night—most of the credit went to Tim and Matt, but it felt good to finally stick a carp.

The hours passed quickly as Matt poled us downriver. We shot some more fish (including another big carp I hit right between the shoulders), missed countless others, and had lots of fun along the way. Just seeing the underwater aquarium of an illuminated Snake River was well worth the trip. Having an opportunity to learn a new type of fishing—and connect on a few lucky shots—was the icing on the cake. Tight lines!

Book Your Own Hammett Valley Adventure!

Steelhead Arrive in the Boise River