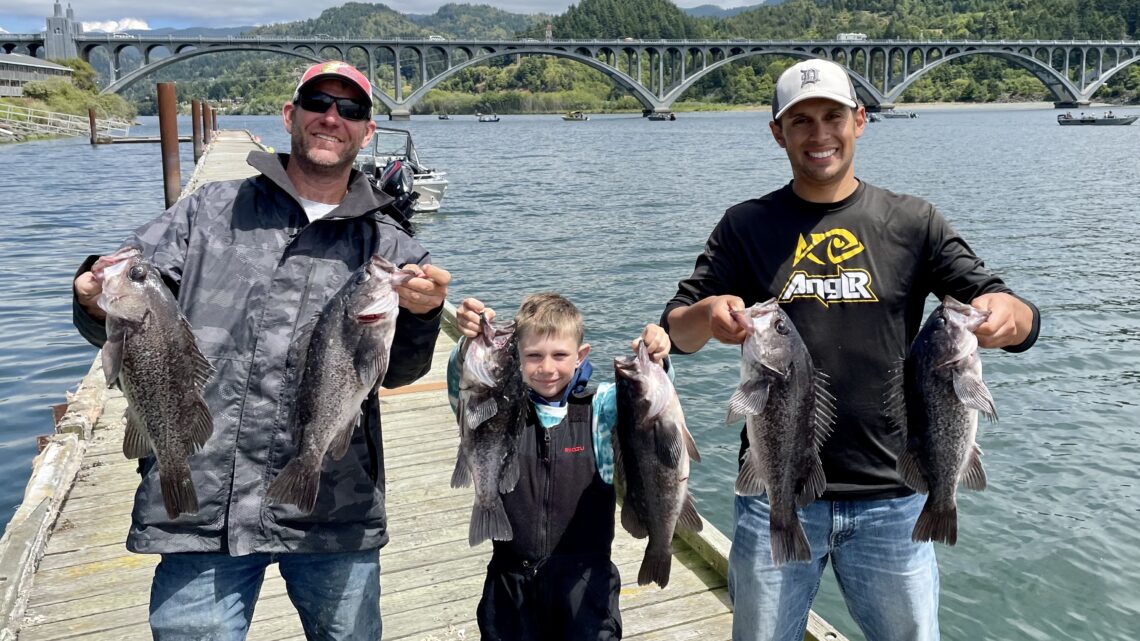 That strategy has led to lots of awesome memories, so when Nick called to tell me he was taking his guide business to the Oregon Coast, I couldn’t wait to check it out.

Nick is well known in Idaho circles for his trophy bass prowess. When the pandemic shut down his Owyhee business, he moved south to Arizona’s Lake Havasu and quickly found success guiding for bass, stripers and trophy red ear sunfish. Havasu is a special place—I experienced it firsthand with Nick’s business partner, Kevin Tucker, over spring break—but it hits a lull when temperatures soar into the 100s. Nick’s search for cooler weather and new opportunities led him to Gold Beach, a quiet southern Oregon town where the prime fishing overlaps perfectly with the Havasu heatwave.

Nick is already up and running, guiding for salmon in rivers and bays that attract some of the best Chinook runs in the West. He’s also planning to offer rockfish and lingcod trips once he secures a bigger boat—but we’ll get to that later.

On this cool, overcast day, we were trolling for Chinooks in the Rogue River Bay. Serving as first mate was Nick’s son, Jaxon, who is essentially a hilarious, eight-year-old version of Nick.

“More salmon are arriving here every day,” Jaxon explained as we launched. “Peak season will be here before you know it!”

Nick rigged up whole anchovies so they spun as we trolled. I took a moment to appreciate the redwood forests, ocean rock formations and basking harbor seals surrounding us. Not a bad setting!

On our second pass, something fishy bumped my bait. It didn’t act like a salmon, and when Jaxon’s rod went off seconds later, I knew something was up.

Sure enough, Jaxon and I reeled up a pair of big redtail surf perch. My brother-in-law Steve and I caught perch from shore during my last visit to the coast, but we were shocked to see them gobbling up six-inch anchovies.

“Aggressive buggers,” Nick smiled. “Let’s put some in the cooler.”

We stayed atop the school and jigged up a dozen nice perch in short order. The bigger ones were pushing three pounds! We wanted to save our anchovies for the salmon, so I put my chewing gum on the hook, and BAM! Another big perch on. We laughed. And, with dinner in the box, we continued our salmon troll.

It was a slow day for Chinook action, and the next time we reached the edge of the bay, I watched Nick scratch his chin while gazing out at a nearly glass-calm ocean. I knew what my friend was thinking before he said it.

We ventured past the breakers and into the open sea. Fortunately, Nick knew a good spot less than a mile offshore. When we arrived at a promising rockpile, we dropped large swimbaits rather than the finesse jigs most guides use.

Jaxon was the first to hook up. It was impressive to see the little guy handling a 10-foot baitcasting rod like a boss. Moments later, I landed a nice black rockfish. Things went quiet for a minute, but Nick broke the silence with his trademark phrase: “GIANT!!!”

I grabbed the net as Nick battled a monster lingcod. Sadly, it came unhooked before we saw it, but the excitement was far from over. For the next two hours, fish were coming aboard nonstop.

Lingcod. Exotic-looking China rockfish. Cabezon. And big black rockfish—by far the best quality I’ve ever experienced. On my last ocean outing, Steve and I sifted through dozens of dinks to earn our limits of respectable keepers. This time, I caught 15, and almost all of them were 3-to-5-pounders that fought like smallmouth on steroids and fried up like a delicious cross between walleye and cod.

Not even a bout of seasickness could knock the grin off my face. Nick was smiling, too. His swimbait hunch was a winner, and he was already formulating a unique, exciting take on saltwater bottom fishing.

“Just you wait, buddy,” he beamed. “We’re getting this dialed in! Big baits. Trophy fish. Light tackle. Salmon, rockfish, lingcod, all of it. And full throttle fishing, just like always.”

I have no doubt Nick (and Jaxon) will succeed in Gold Beach. He’s as talented an angler as I’ve met, and he knows the grind it takes to establish a winning reputation. Before long, I’m sure anglers up and down the coast will learn what I’ve known for some time now.

No matter the water, no matter the species, you should never miss a chance to go fishing with Nick. Tight lines!