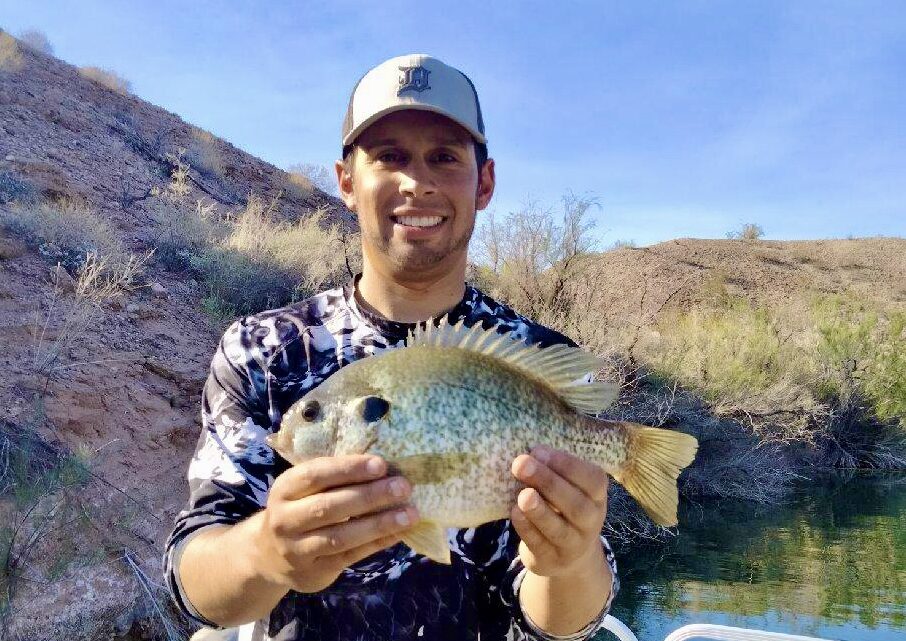 As I climbed aboard the pontoon, I was greeted by two familiar faces—Kevin Tucker and his dog, Wally.

“The desert has been good to you, Tucker!” I smiled. “Look at that tan!”

There is no shortage of Vitamin D on this boat. Because for Kevin and his longtime partner Nick Young, fishing the turquoise waters of Lake Havasu is just another day at the office.

I first met Kevin and Nick five years ago when their guide service, Nick Young Outdoors, was headquartered at eastern Oregon’s Owyhee Reservoir. We hit it off and have fished together several times since, with every trip producing big bass (they are excellent guides) and awesome memories (they’re even better guys).

When the pandemic hit, Nick and Kevin moved south to Havasu, an oasis on the Arizona–California border. They figured out the lake with impressive speed and sent me an open invitation to check out this world-class desert fishery. Over spring break, my opportunity arrived.

Kevin had clients on board in the morning, and they wanted to fish for striped bass. I served as first mate, rigging up rods while Kevin worked to catch our bait—live shad—with a cast net.

An hour later, we pulled up to “Magic Point.” We rigged the shad above a drop shot sinker, with a treble hook through the nose. Within minutes, guest anglers from Iowa and Colorado were battling feisty stripers. Fishing with live baitfish was a new experience for me, too (they are illegal in Idaho). But there was no mistaking the bite, and on my first hookset, a big fish took off on a powerful run.

I worked a 24-inch striper to the net, and there were high fives all around. The bite stayed steady all morning, and Kevin’s clients went home happy with bags of fillets.

Now, it was time to change tactics. One of the major draws of Havasu is its world-record redear sunfish, which grow huge by munching invasive mussels. Fish over six pounds are possible, and two-pounders are relatively common. Unfortunately, a recent cold front had pushed the redear into deeper water.
“I bet we can still find a couple up shallow,” Kevin said. “We’ll put a sneak on them—be ready!”

We slowly patrolled a cove, scanning the water and putting dozens of casts into likely sunfish hideouts. For an hour, all we saw were occasional bass cruising by. Then, I saw a slightly shorter “bass” turn broadside, revealing its frisbee-shaped body.

“Big redear, 11 o’clock!” I whisper-yelled to Kevin while casting ahead of the fish with my drop-shot worm rig. Tucker confirmed the sighting, and we watched as a second redear moved in.

“There are two!” Kevin said. “I think that second one is going to…”

He hadn’t finished his thought when the first fish pounced on my bait. I set the hook and marveled as the biggest sunfish of my life raced toward a brush pile. I kept the pressure on and guided him to the boat, where Kevin scooped him up with a triumphant whoop. Wally even emerged from his shaded hideout to check out the action.

This redear measured 13 inches and weighed almost two pounds. An absolute giant—it’s crazy to think Havasu grows fish three times as heavy! After photos and a release, we fished on.

We kept our eyes peeled for sunfish, but with a redear and multiple stripers on the board, we turned our attention to knocking out a Havasu Grand Slam—catching a redear, striper, largemouth and smallmouth in the same day.

The smallmouth came easy—a gorgeous four-pound specimen snapped up my Ned rig on the first cast. We had to work for the largemouth, which were hiding in gnarly cover. But Kevin pulled a four-pounder from under a tree, and after a few tries, I placed a perfect cast behind a stump to fool a three-pounder and complete my Havasu Slam.

Kevin and I bumped fists and smiled. After our bluebird day filled with desert landscapes, epic fishing and reuniting with old friends, there was nothing left to say. Until next time, Havasu! Tight lines!