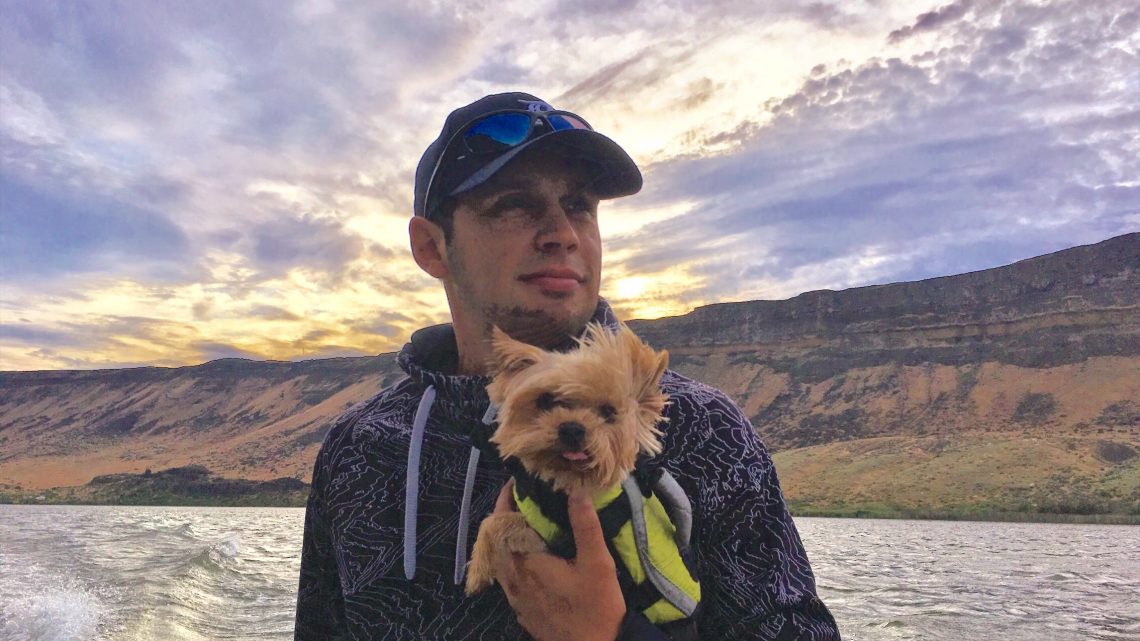 I’ll be honest up front—this is the most difficult column I’ve ever written.

Winston, our Yorkshire terrier and my best fishing buddy for 11 years, has gone to doggy heaven. His passing was free of suffering, but sudden and unexpected. He was my first pet and, for most of his life, an only child for me and my wife, Anna.

When we talked about getting a dog, I was more in the big, outdoorsy dog camp, while Anna had her heart set on a Yorkie. So, we compromised—we got Winston, and he became my adventure dog.

And boy, what an adventure it was. Winston could do it all. He hiked Table Rock. He floated the Boise River. And—shocker, I know—he became a diehard fisherman. Every time I pulled out his little lifejacket, he made a beeline for his car carrier, eager to hit the road.

Winston’s adventures on the water were too numerous to count. We fished from banks, boats, canoes and kayaks. He spent warm afternoons chilling on my lap while I kicked around lakes in my float tube. Technically, he even ice fished once—we were staying in a cabin at Warm Lake, and Anna brought a bundled-up Winst to our shelter to check things out.

Winston was an intrepid hiker who made several miles-long treks to alpine lakes. I was amazed by his fearlessness and stamina. When the trail got narrow and difficult, he had a special talent for picking the best route on his four tiny paws.

Winston loved a fun day in the sun. After blazing the trail to our fishing hole or riding proudly on my knee with the boat breeze in his hair, he always found a comfy spot to curl up and relax. When fish and excitement struck, he scampered to the water’s edge to see what we’d caught.

Winston was a good luck charm. He was there the day I caught my personal-best largemouth bass. It was comical how small he looked next to that lunker. He was there when my buddy Caleb landed our first tiger muskie. Winst joined me and Anna for the maiden voyage in my boat. On his last outing in that boat, we caught a smallmouth bass and two catfish that outweighed him. More than once, I landed a nice fish by hand because Winston had decided to take a nap in my net.

Winston was a champ, but after a long day outside, the little guy needed a snuggle. I’d occasionally let him ride home on my lap, where he softly snored while I stroked his golden head. When we got home, he immediately curled up with his mom. We weren’t big on table scraps, but anytime I cooked our catch, Winston got to partake.

In the days since Winston left us, I have noticed a lot of emptiness. The blanket on our bed where he slept. His favorite spots by sunny windows and open heat vents. But mostly, the place in my heart that he filled with so much happiness for so many years. I will always miss my dearest little friend, although I know in time the sadness will be eclipsed by happy memories of our adventures together.

As I held Winston in my arms for the last time and felt his spirit leave us, all I could manage was a choked-up “I love you, buddy.” When I see him again, I think the first thing I’ll say is “Thank you.” These loving little creatures give us so much. I hope he knows how meaningful his presence was in my life.

If you have a fishing buddy at home, please do me this one small favor. Pat his little head, give him a good scratch behind the ears, and tell him he’s a good boy. And if it’s nice out, take him fishing.

4 thoughts on “Saying Goodbye to my Best Fishing Buddy”