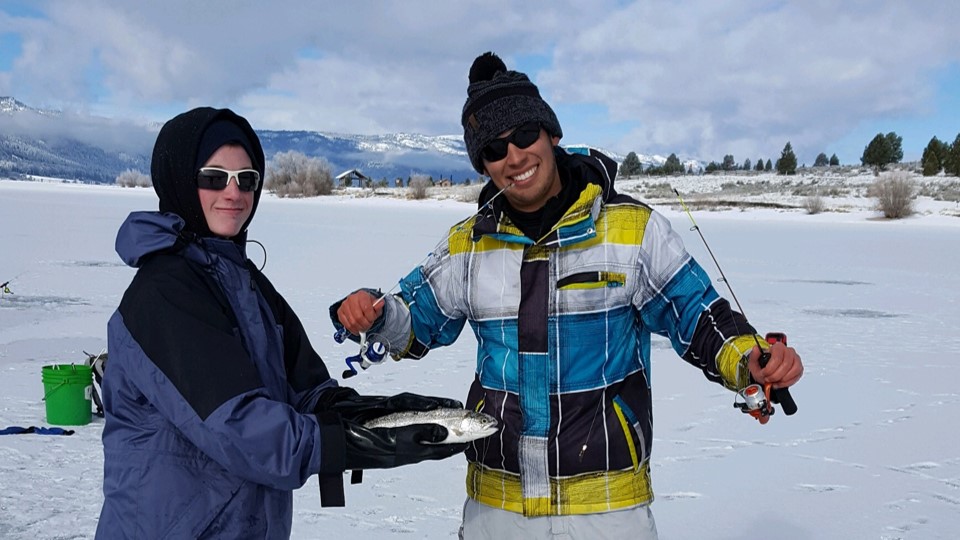 We’ve all heard our share of crazy fish stories. But some must be seen to be believed—like the adventure I nicknamed the Miracle on Ice.

I teach an annual ice fishing class through Tight Lines 208. As part of the class, students spend a day putting their lessons to use on the ice. The first time I taught the class, our group enjoyed a beautiful day with sunny skies and a steady bite.

Around lunchtime, I noticed a bite on one of our angler’s rods and tried to alert him. He turned around, but it was too late—the fish had dragged the rod out of its holder and down through the ice. It was the first time I’d ever seen a rod disappear.

But it would not be the last.

A while later, another pole got a bump. Before I could even put my jigging rod down, the rod and its holder lurched toward the hole. I Superman-dived in an attempt to save my gear, bashing my knees and elbows against the ice. The entire setup was under water, so I plunged my left arm down the hole, somehow managing to grab the rod holder.

Sadly, the holder came up empty. My favorite ice rod—nicknamed R2 for its blue-and-white resemblance to the Star Wars droid—had been dragged to a watery grave.

I couldn’t believe our luck. I started the day having never lost a rod, and now we’d lost two in less than an hour.

I didn’t have to wait long. After about 5 minutes, another of my rods started bouncing. I hustled over and set the hook.

I’ll never forget what happened next. As I reeled in, my tiny white jig came into view beneath the ice. There was nothing on it, but I still felt the thrash of a fish. Then it hit me—the jig had hooked R2!

I grabbed the lure and, sure enough, there was a strand of fishing line draped over the hook. I pulled up on the line and retrieved R2, covered in weeds but otherwise no worse for wear.

Incredibly, the would-be rod thief was still attached. I reeled up a feisty 14-inch rainbow trout as the rest of the group watched in awe.

“What a story!” student Shane Maxwell exclaimed. “Although if I wasn’t here to see it myself, I don’t know that I would believe it.”

The Miracle on Ice taught me a valuable lesson: I now flip the anti-reverse switch on my reels so that if a fish grabs the bait and runs, the handle will spin backwards rather than allowing the fish to pull against a tight line. In theory, this should keep R2 and the rest of my rods from going swimming again. I just have to remember to flip the switch back before setting the hook.

While ice fishing is a blast, it’s not uncommon for the action to come in wild spurts after long droughts. So, as long as there are lines in the water, stay focused and keep a sharp eye on those rods!