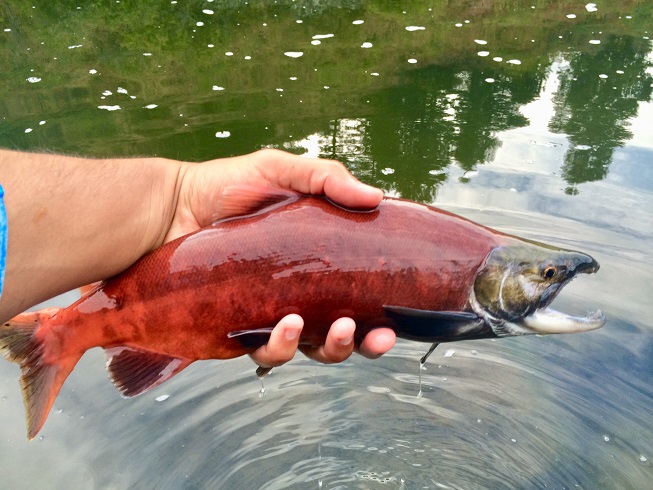 In terms of leaves on the trees, it’s a little early to be talking about fall colors. But for fishermen, the transformation already is well under way. And we Idahoans are fortunate to have a front-row seat for one of the coolest, most dramatic metamorphoses in nature.

I’m talking about the annual kokanee salmon run, when the fish turn bright red, leave their native reservoirs and traverse inlet streams to spawn and complete their life cycle.

Kokanee are genetically identical to anadromous sockeye salmon, but kokanee are landlocked in freshwater. For most of their lives, kokanee are silver with a blue-green back. They are a popular target for anglers, who primarily use trolling rigs to catch them in Lucky Peak, Anderson Ranch and other lakes.

In mid-to-late August, adult kokanee—usually those in their fourth or fifth year—turn fire-engine red with a green head. Males developed a large hump on their back and a dramatic hooked jaw, and entire schools of kokanee gather near inlet streams to begin their final journey. It’s a stunning transformation that is beautiful to watch, and it can lead to fun fishing, too.

Like many salmon species, kokanee become disinterested in feeding once they begin their spawning run. The fish are consumed with the single-minded goal of spawning, so getting them to bite is quite a trick. Kokanee will sometimes eat a salmon egg, particularly early in the run. But other than that, your best bet is to get them to hit something out of aggression. Big shiny spoons, brightly-colored streamers or a piece of neon yarn make for good kokanee tackle.

Opinions vary on the table quality of red kokanee. Technically, the fish are dying, so the flesh can be soft and unappetizing, especially later in the run. Some folks say they taste fine, especially smoked. I prefer to release the fish so they can finish their journey. There’s something noble in the willpower and effort they put into completing their life cycle.

Trout fishing can be awesome during the kokanee run, so bring a jar of salmon eggs and your favorite trout lures. And whether the salmon are biting or not, watching the bright red critters power their way upstream is truly an Idaho rite of fall. Tight lines!