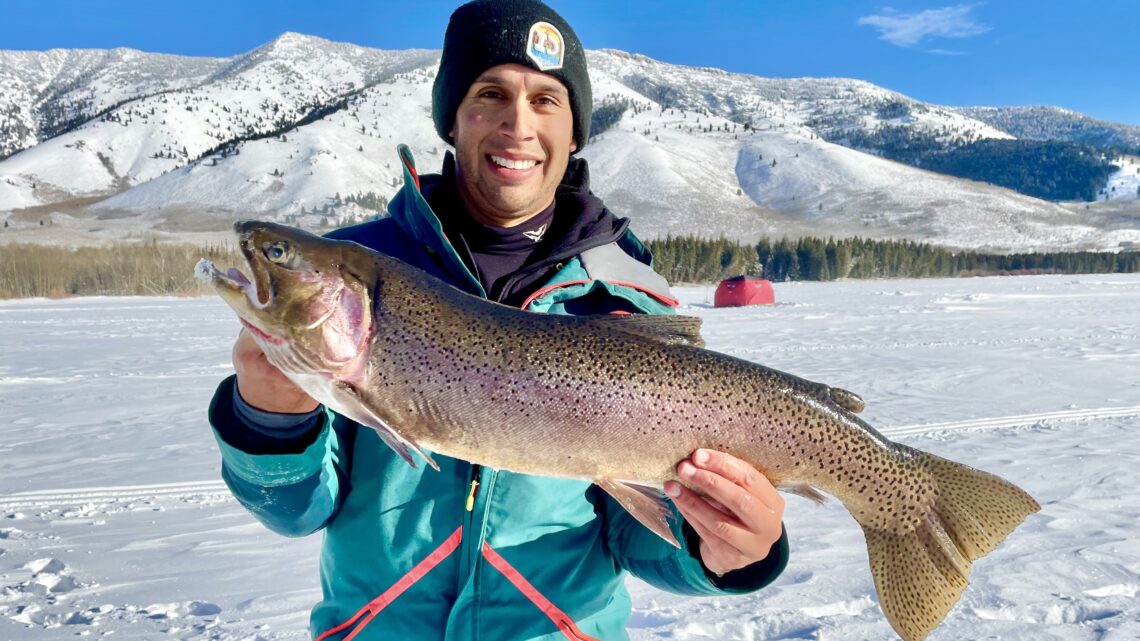 Every year, my friends and I kick off ice fishing season at Henrys Lake. There are several reasons behind our journey—Henrys is one of the first lakes to freeze, and it’s always a fun trip with great company—but one stands out above the rest:

We come to Henrys because we know the fish of a lifetime swims beneath its frozen surface.

The rare monster that gives you chills just thinking about it.

The One Fish to Rule Them All.

And we’ve named him Walter.

We’ve been chasing Walter for years. And while every trip is memorable—18-inch fish are common, and we’ve caught lots of 20-to-24-inch trout that would be trophies at most Idaho fisheries—Walt has remained an elusive Holy Grail.

There have been near-misses. Lines have been snapped by unseen giants. Entire rods have been dragged beneath the ice to a watery grave. These close encounters stung, but they also left no doubt that Walter was down there.

This year, winter arrived ahead of schedule. Usually, an early December trip means fishing on the first safe ice (four inches). This year, it was already 10-inches thick, with a foot of snow on top. The night we arrived, we barely beat a blizzard to our cabin at Sawtelle Mountain Resort.

Our full day on the ice was delayed by road closures while the plows finished working. When we got to the lake, parking was virtually nonexistent. We hiked, drilled, shoveled, scooped and, finally, started fishing.

The pattern repeated all day long. We hiked. We drilled. We shoveled. We searched for fish with our flashers. We marked precious few, and only managed a handful of finicky bites. In total, our group landed six fish (we typically catch dozens). I did end the day on a high note, landing an 18-inch cutthroat after hiking a mile to an old honey hole. He wasn’t Walter, but it sure felt good after all that effort.

That night, over pizza and college football, we hatched our plan for the next morning. Traditionally, Saturday is a quick morning session for some bonus fish before the long drive home. With such tough fishing, a few hours barely felt like enough time, but we decided to stick it out and try one last spot.

With clear roads, we were on the lake before sunrise. Still, two hours passed without a bite. Finally, my buddy Caleb hooked up, and I scrambled over to help him wrestle a 21-inch cutthroat through the hole. We’d never been so happy to see a nice fish at Henrys!

Fifteen minutes later, Caleb landed another decent trout, and our buddy Justin followed with a beautiful 19-incher. My rods stayed eerily quiet, but it was encouraging to see some action. At 9:30, I drilled one last row of new holes—mostly to keep warm, I joked—and hoped my opportunity would come.

Just after 10 a.m., I got my only bite of the day. I set the hook, and after a few big head shakes, the fish took off, peeling 50 yards of line off my reel. Justin, who had come over to assist, raised his eyebrows.

“Might be Walt,” I said. “Let’s reel up my other lines so he doesn’t swim through them.”

Caleb arrived in time to see the fish make another long, drag-burning run. We’ve both battled some big fish on the ice, but we’d never seen one fight like this.

The fight lasted a nerve-racking 10 minutes. At one point, I was worried the fish might spool me. At another, he got stuck in a patch of weeds. But my 28-inch rod and 6-pound test were up to the task and, eventually, we saw the giant flash of the fish through the hole. On its next pass, we caught a glimpse of his massive head.

Oftentimes, landing a big fish through the ice is the trickiest part. But Walter was so massive that once I got his head pointed up through the ice tunnel, he couldn’t move. Caleb expertly plucked him out of the hole, and the three of us marveled at one of the most incredible fish we’d ever seen.

“Let’s gooooooo!!!” I shouted, and it echoed off the nearby mountainside. There were high-fives all around. Catching a big fish is always a thrill, but this was next-level stuff.

Walter, a cutthroat-rainbow hybrid, officially measured 30 inches long and weighed 9 pounds, 5 ounces. I might never surpass those numbers, but I think what I’ll remember most is feeling overcome with gratitude. On a bluebird winter morning—at the 11th hour of the most challenging weekend of ice fishing I’ve ever experienced—we kept grinding, kept believing and, ultimately, persevered.

We finally got to meet Walter. And boy, was he worth the wait. Tight lines!